Archive for the ‘Art related’ Category

If youâ€™re an entrepreneur (or ever had daydreams during death-by-boredom conference meetings of becoming one) youâ€™re familiar with the process of trying to come up with â€œthe big idea.â€ It ainâ€™t easy, to say the least: researching, brainstorming, sleepless nights, feeling like your banging your head against a brick wall, headaches (from actually banging your head against a brick wall), more sleepless nights (from uncomfortable bandages wrapped around now bruised head). Then, finally, at 4:23am as you lay in bed ready to strangle the 1,099th sheep youâ€™ve counted â€“ the idea finally comes!

Maybe it’s the hardwood floors. Or the wood-framed photographs of surf images from around the world, blown up large, stretched and framed in driftwood, hung neatly for display.

Maybe it’s the low-tempo surf videos that sometimes play in the corner, or maybe it’s Rob Gilley himself â€“ intelligent, calm Rob Gilley in his button-down shirt and bare feet, the kind of guy who reminds you what’s good about surfing.

Whatever it is, the Pacific Surf Gallery in Cardiff is seriously peaceful, exuding a kind of refined beach ease that makes a surfer want to stay a bit.

Ostensibly, the gallery is a small rectangular retail space, wedged between a Starbucks and a gym, a place that Gilley started in 2002 with his wife, then sold in 2005, then bought back, redesigned and reopened last month, selling fine, arresting surf photographs and paintings.

More than that, though, the gallery’s iteration will see…Â  Details 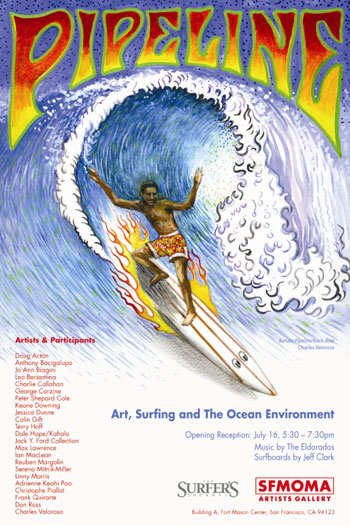 From July 16 to August 28, 2009, the SFMOMA Artists Gallery will present the exhibition Pipeline: Art, Surfing, and the Ocean Environment. The exhibition examines the influence of surf culture on Bay Area artists and will feature paintings, sculptures, photographs, installations, film, and mixed media works alongside custom surfboards by Jeff Clark, one of the most noteworthy big wave surfers.

SurfingÂ was popularized by Olympic swimmer and Hawaiian waterman Duke Kahanamoku in the early part of the 20th century. It spread to the United States, catching on first in California, and reached new heights in the 1960s, when surfing as a phenomenon became a nexus between youth culture and expressions of personal freedom…Â  Details

Warning: call_user_func_array() expects parameter 1 to be a valid callback, function 'print_footer' not found or invalid function name in /homepages/46/d276293588/htdocs/wp-includes/class-wp-hook.php on line 288